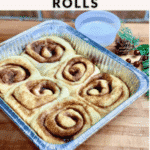 💬Featured Comment: "These were absolutely delicious! And so very easy to make. First, I made two batches. One for myself and one for a friend. Then I made additional batches for gifts to my neighbors. All gifts were very much appreciated! This will turn into a yearly tradition (per request from a couple of people). Thank you Amy for sharing this with all of us."--Lynne

Make-ahead cinnamon rolls from scratch with this easy take and bake cinnamon roll recipe! They're fresh, homemade, and ready to heat and eat straight from the freezer. Make them for your family or give them as a delicious gift this holiday season. Or store them in your freezer so you can have soft and gooey cinnamon rolls whenever you like!

⏲️ How to Make Take and Bake Cinnamon Rolls

Many years ago at Amycakes Bakery, we tried several test batches and experiments to get the perfect "Take 'n' Bakes". We wanted cinnamon rolls that freeze well and still bake up with a soft and gooey texture.

Because yeast has a tendency to die off in the freezer (which affects the rise of unbaked rolls), it is best to fully bake your cinnamon rolls just to completion and then freeze them. It's similar to par-baking, and then when ready to serve, we'll finish baking them from frozen until they are heated through.

If you'd prefer a breakfast recipe where you freeze ahead the pastry unbaked, try my homemade cream cheese danish recipe.

Here are the Steps:

🥣 The Dough and Filling

The dough and filling in this make-ahead Cinnamon Roll recipe is the same recipe used in my Soft and Gooey Bakery-Style Cinnamon Rolls. You can also use the method described within the recipe below to turn my Maple Pecan Cinnamon Rolls or Mini Cinnamon Rolls into Take and Bakes (or any other cinnamon roll flavors).

Feel free to download this printable to provide easy storage and baking instructions. There are two instructions printed per page, so simply cut the page in half.

I hope you enjoy these make-ahead Take and Bake Cinnamon Rolls this holiday season! 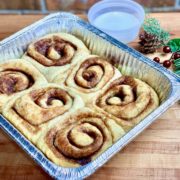 Bake and Serve the Take and Bakes

Notes for 2x batches (some of these won’t apply if you are using the grams measurements):
3 tsp= 1 Tbsp
4 Tbsp= ¼ cup
Notes about Instant Clearjel: Read my article Instant Clearjel: a Magical Bakery Ingredient to see why I think this ingredient is worth having in your pantry.  Instant Clearjel must always be whisked thoroughly with other dry ingredients before being added to wet ingredients to avoid clumping.  (Please make sure what you purchase is labeled as “Instant.”  Cooktype Clearjel is a different product that does not work the same in baked goods). Recipe Flavor Variations:
You can also use the baking and freezing method in this recipe with my  Maple Pecan Cinnamon Rolls or Mini Cinnamon Rolls or other cinnamon roll recipes. Baking from Thawed:
You can also bake the Take and Bakes from thawed, however they won't be as gooey.  Thaw the cinnamon rolls and glaze in the refrigerator. Preheat your oven to 325 degrees. Remove plastic wrap (leave the foil lid on). Bake for 20-30 minutes or until heated through and lightly golden brown.
Author: Amy
Calories: 686kcal