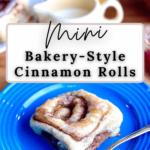 💬 Featured Comment: "I loved your bakery and I love your website recipes. I was wondering if you would ever share the recipe for I believe you called them Mini Cinnamon rolls? They were the best I have ever had"--Donna

In recent posts, I shared my large bakery-style cinnamon rolls recipes. Today I'm showing you how to make them into half-size (or even smaller) cinnamon rolls. Despite being much smaller than their giant siblings, these mini cinnamon rolls bake up just as soft and gooey with a delicious yeast dough and brown sugar cinnamon filling.

Now that we’re working with such small (and cute) portions, we need an equally cute name. We called these half-size cinnamon rolls our "Cinnamon Roll Halfsies" at Amycakes Bakery. I’ll walk you through exactly how to make mini cinnamon rolls with pictures and a video.

There are several keys to making sure your cinnamon roll dough is soft. First, we don't knead any flour into the dough. Instead, we mix up the stretchy and sticky dough in a bowl with a heavy-duty spatula. I talk more about this yeast dough in my large Bakery-Style Cinnamon Roll Recipe.

Second, allow the dough to rise for at least one hour, or until it's doubled in size. This allows for lots of air bubbles that will make your finished rolls light, fluffy and tender. I use instant yeast in these cinnamon rolls because it has more proofing power than active dry yeast. It also cuts down the rise time by half and takes less time to make the dough!

Third, refrigerate your risen yeast dough for at least 4 hours or overnight before rolling it out it. I know—it's an extra step, but it's worth it! This allows the dough to rest and makes it much easier to roll out from cold.

And lastly, you've got to handle the dough gently when you roll it out. Only add flour as needed when the dough sticks to the table or the rolling pin. I go into more detail within the recipe card below, and you can also watch me roll them out within the recipe video.

The 1x batch of this recipe makes 12 mini (half-size) cinnamon rolls, and it has the exact same ratio of ingredients as a 1x batch of my Bakery-Style Cinnamon Rolls that makes 6 large cinnamon rolls. The only difference is how we roll them out.

How to roll out a 1x batch (12 mini cinnamon rolls)

To roll out one dozen mini cinnamon rolls, we'll roll the dough into a long and skinny horizontal rectangle (18"x8"). Carefully but tightly roll up the dough, then firmly pinch the edges together. I use a pastry divider to score twelve even cinnamon rolls, then I cut them out with a bench scraper.

How to roll out a 2x batch (24 mini cinnamon rolls)

If you'd like to make two dozen mini cinnamon rolls, hit the "2x" within the recipe card to double the recipe. Instead of making a double-long skinny roll, which would be hard to do (and take up a lot of counterspace), roll it out into a large rectangle (18"x16"--this is the same size rectangle you would use to make one dozen large cinnamon rolls).

Spread your butter and cinnamon sugar mixture on top of your dough, then cut it in half horizontally before rolling it up. You'll now be rolling up two cinnamon roll logs which make 12 cinnamon rolls each.

How to Roll Out Even Smaller Mini Cinnamon Rolls

To get 18 cinnamon rolls from a 1x batch, just roll out your rectangle about 24 inches wide and 6 inches deep, roll up like normal, then score and cut out 18 rolls:

To get 36 mini cinnamon rolls from a 2x batch, roll out your dough to the size described within the recipe for a 2x batch (18"x16"), but cut it horizontally into thirds, and roll up all three into logs--each will make 12 cinnamon rolls, bringing your total to 36 rolls.

Prep your Tools and Ingredients to Save Time

I recommend having all of your ingredients, utensils, equipment, pans, and tools ready before you begin to roll (I describe my prep recommendations within the recipe). One dozen mini cinnamon rolls fit perfectly in a 9x13x2 inch cake pan, and two dozen (a 2x batch) fit in an 11 x15x2 pan (you can also use a 12x18 pan or two 9x13 pans). You'll want to brush your pan generously with melted butter and set it aside while you're getting everything else ready.

These mini cinnamon rolls are the perfect size for brunch! I hope you enjoy them this holiday season! 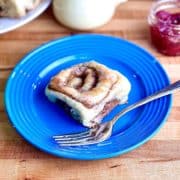 Notes for 2x batches (some of these won’t apply if you are using the grams measurements):
3 tsp= 1 Tbsp
4 Tbsp= ¼ cup
Read the Recipe Post for photos and details on how to make these mini cinnamon rolls, with the option to roll them out even smaller. You can turn these into mini maple pecan cinnamon rolls by using the large Maple Pecan Cinnamon Rolls recipe.  Just roll them out and bake them as described within this recipe.   Notes about Instant Clearjel: Read my article Instant Clearjel: a Magical Bakery Ingredient to see why I think this ingredient is worth having in your pantry.  Instant Clearjel must always be whisked thoroughly with other dry ingredients before being added to wet ingredients to avoid clumping.  I have tested this recipe with the following Instant Clearjel brands: Hoosier Hill Farm,  Prepared Pantry, and Ingredion (Make sure what you purchase is labeled as “Instant.”  Cooktype Clearjel is a different product that does not work the same in baked goods).
Author: Amy
Calories: 686kcal
Tried this recipe?Mention @amycakesbakes or comment below! I'd love to hear from you!
Print Recipe