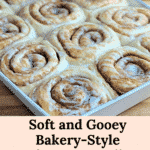 💬 Featured Comment: "Your cinnamon rolls are outstanding, I'd love the recipe. I've never found any other with the same texture... I can't imagine a Christmas morning without them!"--Dani B.

This bakery recipe for Soft and Gooey Bakery-Style Cinnamon Rolls was a much-loved recipe at Amycakes Bakery. We served them hot out of the oven on "Cinnamon Roll Fridays." During the holidays we made up to 100 dozen cinnamon rolls a week!! These cinnamon rolls are soft and gooey all the way to the edge of the roll. No kneading is required to make this soft and pillowy dough, and it's made with instant yeast, which means a faster rising time.

What's the secret to a soft cinnamon roll?

To make these cinnamon rolls gooey we're going to be using a brown sugar and cinnamon mixture, and lots of it. In addition, we'll be adding some flour and Instant Clearjel (my favorite bakery secret that I described above) to some softened salted butter. This thickens the butter mixture so that it doesn't dissolve into the dough or melt into the bottom of the pan.

Split the Work Between Two Days

My recommended method is a two-day process--it will provide the best results. Make the dough on day one, and roll them out on day two.  When you use this method, your dough will be ready to roll out as soon as you wake up, meaning less time to wait for a delicious cinnamon roll breakfast.  Here's how I do it:

I'd love to hear what you think of this recipe! Comment below, or tag @amycakesbakes with a photo of your cinnamon roll creation.  🙂  I hope you enjoy this bakery recipe. 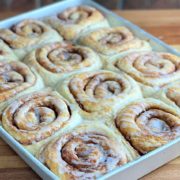 5 from 50 votes
This bakery recipe for Soft and Gooey Bakery-Style Cinnamon Rolls was a much-loved recipe at Amycakes Bakery. The cinnamon rolls are soft and gooey all the way to the edge of the roll. No kneading is required to make this soft and pillowy dough, and it’s made with instant yeast, which means a faster rising time. For the best results, make your dough on day one, and roll out on day two, as described within the recipe.
Servings 6 large cinnamon rolls
Prep Time20 mins
Cook Time25 mins
Rise time2 hrs
Print Recipe Pin Recipe

Notes for 2x batches (some of these won’t apply if you are using the grams measurements):
3 tsp= 1 Tbsp
4 Tbsp= ¼ cup

Notes about Instant Clearjel: Read my article Instant Clearjel: a Magical Bakery Ingredient to see why I think this ingredient is worth having in your pantry.  Instant Clearjel must always be whisked thoroughly with other dry ingredients before being added to wet ingredients to avoid clumping. (Make sure what you purchase is labeled as “Instant.”  Cooktyle Clearjel is a different product that does not work the same in baked goods). RECIPE UPDATES:
9-16-21: The original recipe was for 12 cinnamon rolls.  All my recipes now start with small batches, so it now makes 6 cinnamon rolls.   Press the “2x” if you’d like to double the recipe to make 12 cinnamon rolls.
Author: Amy
Calories: 686kcal
Tried this recipe?Mention @amycakesbakes or comment below! I'd love to hear from you!
Print Recipe
« The Easiest Fudgy Chocolate Ganache Cake Filling and Drizzle
Lemon Drizzle Layer Cake: a Bakery Recipe »

Recipe creator, cake decorator and lover of all things sweet. 🍰 Amycakes was the small family bakery I owned for over a decade. Now I'm sharing all my secrets! 😊.