💬 Featured Comment: "Maple and pecan is a flavor match made in heaven! And soooo dreamy turned into these pillowy rolls! Made these over the weekend and the kitchen still smells heavenly! This will be my go-to breakfast treat for the holidays."--Marie

How do you make the best cinnamon rolls ever? By adding maple and pecans! This secret bakery recipe combines three amazing flavors into one bakery-style, maple-pecan cinnamon roll that everyone will love. Buttery maple glaze melts into the dough and crunchy pecans add a delightful texture contrast to the soft, pillowy inside of these yummy rolls. They are sure to make your house smell amazing and turn heads when you bring them to the office or the family Christmas brunch.

By now you may have tried my Soft and Gooey Bakery-Style Cinnamon Rolls recipe—one of my most popular recipes from Amycakes Bakery. While that recipe is the “classic” cinnamon roll variety (and I highly recommend you try them), these maple pecan variety are my personal favorite. Classic cinnamon rolls were one of our top sellers, but I found that once a customer tried these maple pecan cinnamon rolls, they were often converted to maple pecan lovers for life.

In Case I Haven't Convinced You to Try This Recipe Yet…

I recently mentioned this on my Facebook and Instagram, but if I could convince you to try any ONE bakery recipe on this website, it would be one of my cinnamon roll recipes. Both cinnamon roll recipes have the perfect soft and fluffy texture with an extra gooey center--They melt in your mouth in every bite and are soft all the way to the very edge. It's due to the Instant Clearjel in the soft yeast dough, the extra brown sugar cinnamon filling, and the way we bake the rolls so that they stay soft to the very edge.

How to Make Soft and Gooey Maple Pecan Cinnamon Rolls

Be sure to check out my Soft and Gooey Bakery Style Cinnamon Rolls recipe for a more detailed post and video about every step that makes the dough so delicious. Here's a quick recap:

Let me know, what’s your favorite-- Classic or Maple Pecan? I can’t wait to hear what you think of this recipe! 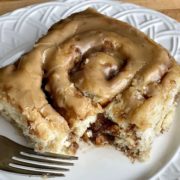 5 from 11 votes
This bakery recipe for Soft and Gooey Maple Pecan Bakery-Style Cinnamon Rolls was a much-loved recipe at Amycakes Bakery. The cinnamon rolls are soft and gooey all the way to the edge of the roll. No kneading is required to make this soft and pillowy dough, and it’s made with instant yeast, which means a faster rising time. For the best results, make your dough on day one, and roll out on day two, as described within the recipe.
Servings 6 large cinnamon rolls
Prep Time20 mins
Cook Time25 mins
Rise time2 hrs
Print Recipe Pin Recipe

Notes for 2x batches (some of these won’t apply if you are using the grams measurements):
3 tsp= 1 Tbsp
4 tablespoon = ¼ cup
Notes about Instant Clearjel: Read my article Instant Clearjel: a Magical Bakery Ingredient to see why I think this ingredient is worth having in your pantry.  Instant Clearjel must always be whisked thoroughly with other dry ingredients before being added to wet ingredients to avoid clumping.  I have tested this recipe with the following Instant Clearjel brands: Hoosier Hill Farm,  Prepared Pantry, and Ingredion (Make sure what you purchase is labeled as “Instant.”  Cooktyle Clearjel is a different product that does not work the same in baked goods). RECIPE UPDATES:
9-16-21: The original recipe was for 12 cinnamon rolls.  All my recipes now start with small batches, so it now makes 6 cinnamon rolls.   Press the “2x” if you’d like to double the recipe to make 12 cinnamon rolls.
Author: Amy
Calories: 686kcal
Tried this recipe?Mention @amycakesbakes or comment below! I'd love to hear from you!
Print Recipe
« Strawberry Shortcake Trifle
Cake Truffles: a Variety of Flavors in One Simple Recipe »

Recipe creator, cake decorator and lover of all things sweet. 🍰 Amycakes was the small family bakery I owned for over a decade. Now I'm sharing all my secrets! 😊.