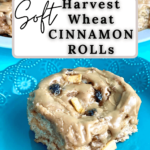 This soft and gooey wheat cinnamon roll recipe makes the perfect comforting breakfast on a chilly morning. Made with half whole wheat flour in a soft yeast dough, they are filled with finely chopped apples, juicy raisins & chopped pecans. They're drizzled with a buttery maple glaze that melts into every bite, making it impossible to stop at just one!

This wheat cinnamon roll recipe is made with a yeast dough very similar to my popular bakery cinnamon roll recipes. That means that it is a no-knead dough made with instant yeast for a faster rising time, and Instant Clearjel (my favorite bakery ingredient) for a super soft and gooey center. You can learn more about this special dough recipe in the original Bakery-Style Cinnamon Roll recipe.

Because these wheat cinnamon rolls are rich with a hearty apple, raisin, and pecan filling, I decided to roll these out as mini cinnamon rolls--one dozen of these fit in a 9x13x2" cake pan. You can learn more about this rolling method with a detailed video in my Mini Cinnamon Rolls: a Bakery Method and Step by Step Guide.

Soak the raisins for 5 minutes in hot or boiling water, then strain them well--this will make the raisins very juicy. Finely slice then chop the apples so they will have the perfect texture inside the cinnamon rolls.

How do you store these wheat cinnamon rolls?

These wheat cinnamon rolls have the best soft and gooey texture the day they are baked. Store any remaining cinnamon rolls at room temperature and eat within a couple of days. Leftovers can be heated individually in the microwave for around 15-30 seconds.

You can also wrap and freeze individual baked cinnamon rolls. Wrap each cinnamon roll thoroughly in plastic wrap then freeze. When you are ready to serve them, thaw them for a few hours at room temperature, then heat them up for a few seconds in the microwave.

Can you make these in advance as Take and Bake Cinnamon Rolls?

Definitely! If you'd like to make the cinnamon rolls in advance, please follow the baking and freezing instructions in my Take and Bake Cinnamon Rolls recipe.

Can I substitute out the Instant Clearjel?

I have not yet tried this recipe without Instant Clearjel, as it is one of the ingredients that gives the cinnamon rolls their super soft texture, and keeps the filling thick and gooey. However, I'm guessing this recipe would still be delicious without it--if you have any luck with a substitution, please let me know!

Where to find Instant Clearjel?

Although it’s not often available in grocery stores, it’s sold in a variety of online stores:

You can see the video version of this recipe within this post, or check out my mini cinnamon roll video to see how I rolled these out.

Please let me know if you try this yummy wheat cinnamon roll recipe! And please take a picture and tag @amycakesbakes on Instagram. I LOVE seeing what you bake. Enjoy! 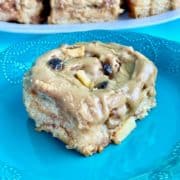 5 from 10 votes
This bakery recipe for Soft and Gooey Wheat Apple Cinnamon Rolls with raisins and pecans are soft and gooey all the way to the edge of the roll. Add this recipe to the much-loved cinnamon roll recipes from Amycakes Bakery. No kneading is required to make this soft and pillowy dough, and it’s made with instant yeast, which means a faster rising time. For the best results, make your dough on day one, and roll out on day two, as described within the recipe.

For the most accurate baking results, use the grams measurements with a kitchen scale.

Notes for 2x batches (some of these won’t apply if you are using the grams measurements):
3 tsp= 1 Tbsp
4 tablespoon = ¼ cup

Notes about Instant Clearjel: Read my article Instant Clearjel: a Magical Bakery Ingredient to see why I think this ingredient is worth having in your pantry.  Instant Clearjel is what gives these cookies their extra soft and chewy texture and keeps them from overspreading in the oven.  Instant Clearjel must always be whisked thoroughly with other dry ingredients before being added to wet ingredients to avoid clumping.  Make sure whatever brand you purchase is labeled as “Instant.”  Cooktype Clearjel is a different product that does not work the same in baking.  I use Prepared Pantry Instant Clearjel–use the code AMYCAKES to get that linked 18 oz package at 50% off!   You can also find it at Nuts.com.
Author: Amy
Calories: 439kcal
Tried this recipe?Mention @amycakesbakes or comment below! I'd love to hear from you!
Print Recipe
« Mini Buttercream Snowman Cake
Princess Flower Cake »