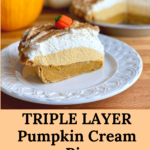 💬 Featured Comment: "I made this pumpkin cream pie for thanksgiving. Forgot to take a picture, but I’ve been told I have to bring it from now on. Thanks for the terrific recipes!!!!"--Brian

The three layers – a layer of classic pumpkin pie topped with a generous layer of pumpkin cream cheese mousse then topped with stabilized vanilla whipped cream – create an extraordinary dessert that your guests won't forget.

At Amycakes Bakery we even converted people who did not like pumpkin pie after they tried this pumpkin cream pie!

Pies can be intimidating to make from scratch, but once your creation is ready, it's worth every second of effort. I've also included an optional shortcut in case you run out of time, or if you just want to spend less time in front of your oven.

The Three Layers to this Pumpkin Cream Pie Recipe

Imagine a classic pumpkin pie. Now, imagine a layer of smooth, fluffy pumpkin cream cheese mousse with all the flavors of fall. Finally, top it with a generous supply of super thick and decadent whipped cream.

The result? A triple layer pumpkin pie that’s even more delicious than it looks! Each flavorful layer melds together into the creamiest bite. It's perfect to serve at Thanksgiving or any holiday party.

The pumpkin pie layer is a traditional pumpkin pie made with canned pumpkin puree, evaporated milk, and delicious spices. The Pumpkin Cream Cheese Mousse is whipped cream cheese with pumpkin puree and cinnamon.

Then we make our thick and stable vanilla whipped cream (stabilized with my favorite bakery ingredient, Instant Clearjel), and fold part of that into the fluffy pumpkin cream cheese mousse, using the remaining whipped cream on top of the pie. If you don't have Instant Clearjel, you can make this pie without it as detailed in the recipe FAQ section.

While the pumpkin pie layer in this recipe is delicious and simple to prepare, it's understandable that you might not have enough time to prepare it during the holidays.

If you’re looking for a shortcut, reach for a pre-made pumpkin pie. Once you top it with the creamy homemade pumpkin mousse and whipped cream in this recipe, your guests may never know.

How far in advance can I make this pumpkin cream pie? How do I store it?

You can make the whole pie a couple of days in advance, but I prefer to divide my time as follows for the best results and so I'm not spending all day in the kitchen:

How long does it take for the mousse and the whipped cream to set up on the pie?

The mousse and whipped cream will be thick and delicious right after you make it due to the Instant Clearjel, but in order for it to have distinguished layers like my photos, allow the pie to set up in the fridge at least 2 hours before serving. I prefer to finish making mine the day before serving.

Can I leave out the Instant Clearjel?

I used to make this pie without Instant Clearjel before discovering the awesome thickener. I recommend using 3 Tablespoons of vanilla instant pudding mix in the pumpkin mousse recipe (as described within the recipe card).

Be sure to refrigerate the pie for at least 2 hours so the cream cheese in the mousse has time to firm up.

Can this Pumpkin Cream Cheese Pie be frozen?

While you can freeze the pie leftovers, I don't really recommend freezing the completed pie before serving, as the pumpkin pie texture changes just slightly, and the pie can separate slightly from the crust. The flavor, however, should not be affected when freezing.

This decadent dessert is sure to be the center of attention at your next Thanksgiving feast! I hope you enjoy it, and please let me know what you think! 🙂 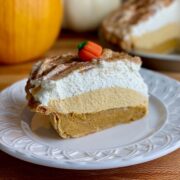 5 from 15 votes
Triple Layer Pumpkin Cream Pie with a layer of traditional pumpkin pie, a layer of pumpkin mousse made with cream cheese, and a layer of stabilized vanilla whipped cream. The perfect Thanksgiving pie! For an optional shortcut, use a premade pumpkin pie and top it with the delicious pumpkin mousse and whipped cream in this recipe.
👩‍🍳 For the most accurate baking results, use the grams measurements with a kitchen scale. Watch the quick recipe video
Servings 8 slices
Prep Time30 mins
Cook Time1 hr 20 mins
Print Recipe Pin Recipe

Read my article Instant Clearjel: a Magical Bakery Ingredient to see why I think this ingredient is worth having in your pantry.  Instant Clearjel must always be whisked thoroughly with other dry ingredients before being added to wet ingredients to avoid clumping.  Make sure what use is labeled as “INSTANT.”  Cooktype or Original Clearjel is a different product that does not work the same. If needed, you may substitute 3 Tablespoons Vanilla Instant Pudding Mix for the instant clearjel in the pumpkin mousse mixture  (in a 1x batch of this recipe).  Then leave the instant clearjel out of the whipped cream recipe.  The vanilla whipped cream topping will not be as thick as the whipped cream pictured without instant clearjel, but it will be delicious.
Author: Amy
Calories: 731kcal