🥕 About this cinnamon buttercream frosting recipe

This frosting whips up quite quickly--it's a simple variation of my popular Vanilla Bakery Buttercream. It has a hint of cream cheese for a super-smooth texture and delicious flavor, but the cream cheese doesn't overpower the flavor--in fact, a lot of people won't realize this frosting contains cream cheese! They'll just wonder how you made such light, fluffy, and flavorful frosting.

⭐ Storing and serving this frosting

Does cinnamon buttercream made with cream cheese need to be refrigerated?

Because the sugar stabilized the cream cheese, according to many articles it can be left out overnight or up to 24 hours, although I recommend refrigerating your finished cake until 2-3 hours before serving just so it doesn’t get too soft on your cake-–For decorated cakes, remove the cake from the fridge 2-3 hours before serving so the cake and frosting can come back to room temp. I'll leave leftovers with this frosting at room temperature for up to 24 hours so it remains soft.

What if I need the cinnamon frosting to be thicker?

I hope you enjoy this cinnamon frosting recipe! Comment below or tag me on social media @amycakesbakes! 🙂 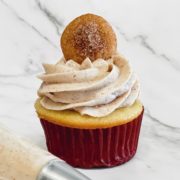